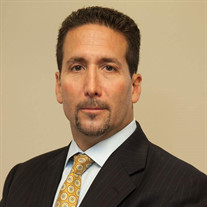 CALCAGNO, ANDREW JOHN, 54, of Westfield. It is with great sadness that the family of Andrew John Calcagno, Attorney at Law announce his sudden passing on Monday, May 20, 2019. Raised in Staten Island, NY and a resident of Westfield, NJ for over 20 years, Andrew was the cherished husband of beloved wife Regina (nee Bagli) of 23 years and devoted father of Nicholas, Laura Jean, and James. He was a leading personal injury lawyer in the tri-state area, having won numerous multi-million-dollar awards. Mr. Calcagno also dedicated countless hours of his time pro bono for the victims of 9/11. As a result of his devotion to the victims of 9/11, Mr. Calcagno is listed as a “hero” in a book published by Trial Lawyers Care (“TLC”) He was the son of John and the late Marie (nee Divito, 2006) and brother of Donna Aiello, Andrea Contessa, and the late Lawrence (2017). His extended family includes 20 brother and sister-in-laws and 29 nieces and nephews. He was a respected boss and a friend to countless many. Family and traditions were most precious to Andrew as he opened his life and home with the utmost of generosity and charm. He graduated summa cum laude from St. John’s University and was among the top in his class at Hofstra University School of Law. Mr. Calcagno was admitted to practice law in New York, New Jersey, Pennsylvania, and the District of Columbia. In 1997, Andrew formed Calcagno & Associates, a leading personal injury trial law firm with offices in New Jersey and New York. Over the past 25 years, Andrew won numerous verdicts and settlements on behalf of his clients. Many of his cases attracted media attention in The New York Times, New York Daily News, New York Law Journal, Staten Island Advance, The Star Ledger, The Bergen Record, New Jersey Law Journal, New Jersey Verdict Search, and National Verdict Search, as well as broadcast segments on Channel 4 NBC News, Channel 12 News, CN8 News, and 101.5 FM Radio. Mr. Calcagno has been named to Thomson Reuters New Jersey Super Lawyers list in the area of Personal Injury for five (5) consecutive years. He published a number of articles on the law for the American Trial Lawyers Associates Friends and family will be received on Tuesday, May 28th from 4-8 PM at Dooley Colonial Funeral Home, 556 Westfield Ave, Westfield. A Funeral Mass of Christian Burial will be celebrated on Wednesday at 10:00 AM at Holy Trinity Roman Catholic Church, 315 First Street, Westfield. ALL MEET AT CHURCH. Cremation and burial will be private. In lieu of flowers donations may be made to Salesian Sister’s Development, 659 Belmont Avenue, North Haledon, NJ 07508, 973-904-0102.

CALCAGNO, ANDREW JOHN, 54, of Westfield. It is with great sadness that the family of Andrew John Calcagno, Attorney at Law announce his sudden passing on Monday, May 20, 2019. Raised in Staten Island, NY and a resident of Westfield, NJ for... View Obituary & Service Information

The family of Andrew John Calcagno created this Life Tributes page to make it easy to share your memories.

It is with great sadness...

Send flowers to the Calcagno family.