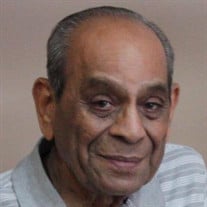 PATEL, CHANDRAKANT B., 87, of Mahwah. It is with deep sorrow and regret that we announce the passing of Chandrakant B. Patel in the early hours of April 7th, 2020 at the tender age of 87. Born in Dharmaj, Gujarat on February 4th, 1933, “Boss Dada”, as we all so fondly remembered him as lived a full and hearty life and was an incredibly loving husband, father, grandfather, great-grandfather, and friend to us all. Growing up, he shouldered the immense responsibility of raising his siblings when his parents unexpectedly passed away, and from then onwards, he has always been someone to rely upon and admire. It is hard to summarize his life into any single story or memory, but Chandrakantbhai has profoundly impacted so many around him. After a long and successful career as a pharmaceutical executive in Ahmedabad, he emigrated to the United States to offer a better life for his family. He worked tirelessly to support his wife and five children, and helped build the foundation for all of them to succeed in a new and foreign country. He will be remembered for his unrelenting selflessness, his enthusiasm in supporting the ambitions of others, and his constant desire to put a smile on others’ faces. He was very particular in supporting higher education, and never hesitated to use whatever money he could spare to make that possible. He worked hard, he worked proud, and he always put the needs of his family above his own. He encouraged his children and grandchildren to be the best versions of themselves and always guided them through their struggles. He was inseparable from his beloved wife, Indira C. Patel, throughout their 67 years of marriage, and they always made sure to take care of each other even until the very end – making sure they both ate, took their medicine, and routinely exercised to stay healthy. In his later years of retirement, he greatly enjoyed traveling whenever possible, playing cards and games with his grandchildren and great-grandchildren, and volunteering alongside the Salvation Army. A devoutly religious man, Chandrakantbhai also dedicated a lot of his time praying to his treasured Ambe Ma. He is survived by his wife, his children, Mitesh, Alka, Shilpa, Dipti, and Ketan, as well as his nine grandchildren, and two great-grandchildren. Unfortunately, memorial services will not be held at this time due to current circumstances stemming from the ongoing pandemic. In honor of his memory and in lieu of flowers, the family kindly asks for donations to the Sankara Eye Foundation, one of the many charities that he was fond of in his life-long passion of wanting to help others.

PATEL, CHANDRAKANT B., 87, of Mahwah. It is with deep sorrow and regret that we announce the passing of Chandrakant B. Patel in the early hours of April 7th, 2020 at the tender age of 87. Born in Dharmaj, Gujarat on February 4th, 1933, &#8220;Boss... View Obituary & Service Information

The family of Chandrakant B. Patel created this Life Tributes page to make it easy to share your memories.

Send flowers to the Patel family.