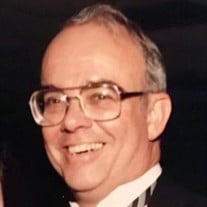 NICHOLAS, CLARK WILLIAM, 85, of Wantage formerly of Upper Saddle River died peacefully surrounded by his family on Saturday, January 1, 2022. He was the beloved husband of Helen (nee Johnson) for 62 years. Loving father and devoted grandfather to Beth Krespan (Jon - Kyle and Erin), Douglas (Cheryl Ann - Andrew), Katrine Lally (David - Jake, Ryan, Owen, Emma, and Bryn), and Dawn DiBartolomeo (Phil -Cara). Clark was born in Brooklyn, NY, on November 2, 1936 to Emily (Rider) and Stewart Nicholas. He graduated from Fort Hamilton High School in Brooklyn at the age of 16. He attended Drew University in Madison, NJ where he met his bride. Clark graduated in 1957 with a political science degree. In 1959, Clark and Helen married. While living in Brooklyn, Clark was drafted to the Army and served from 1960-1962. After serving in the Army, Clark and Helen moved to Middletown, NJ and started their family. In 1969, they moved to Upper Saddle River, NJ where they spent the majority of their years together both raising their children and volunteering in the community. Clark was well known for his involvement with the youth sports for nearly two decades. He coached baseball, softball, and of course basketball. The USR Recreation program was something he was proud to be a part of in developing and expanding. Along with Bucky Rehain, he started the girls’ basketball program. Clark loved the game of basketball, whether he was playing, coaching or refereeing. He was not only passionate about the game, but also about educating the players and young referees about the rules. If his whistle blew, everyone stopped and knew he had a teachable moment. He was well respected by all players, coaches, referees, and fans. Clark was also very involved in the Bergen Highlands United Methodist Church. He was both a lay leader and the treasurer during his years as a parishioner. He was even Helen’s assistant during her last year of teaching nursery at the church. After moving to Upper Saddle River, Clark was employed at Kraft-General Foods in White Plains, NY. He was a manager in telecommunications. He retired in 1993. Clark and Helen moved to Hardyston, NJ in 2005 and then to Wantage, NJ in 2019. Clark was predeceased by his half-brother, Paul Morehouse, and his son, John. He will be loved and missed every day by his family and friends. In lieu flowers please considered making a donation in Clark’s name to: The Wounded Warrior Project @ https://support.woundedwarriorproject.org/Default.aspx?tsid=10043

The family of Clark W. Nicholas created this Life Tributes page to make it easy to share your memories.

Send flowers to the Nicholas family.