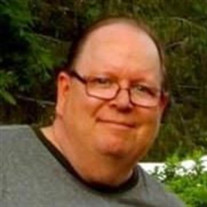 TAYLOR, DAVID SCOTT, 63, of Paterson, formerly of Wood-Ridge, NJ, New Hampshire & Massachusetts, died peacefully on January 4, 2021, after a brief illness. Beloved husband of Madeleine (nee Caravaglia). Devoted brother of Craig & his wife Cindy, Mark & his wife Cindy, and Doug & his wife Heidi. Cherished uncle of Lindsey, Scott, Seth, Nicole, Dylan, Hayley, Lauren & Carl. Doting cat-dad of Gracie, Trixie & Ginger. David was born in NJ but spent his childhood in Acton, Massachusetts. He met his wife Madeleine during a brief trip to Ocean City, NJ in March of 1994. They married the next year and settled in Wood-Ridge, NJ for the next 19 years. The couple relocated to Paterson in 2014. David had a Bachelor’s degree in History from North Adams State College (MA). David’s career was involved in international and domestic shipping, receiving, importing, sales, and service. His last position was with Fortune 8 Sales & Service, Inc., in Englewood, NJ. David enjoyed taking pictures and putting together photo albums for his family to share. His longtime interest in researching genealogy included the compilation of a volume titled, “A Boy Named Charlie,” about his great uncle, Charles S. Carpenter, who died during World War 1. David had a lifelong interest in history and politics and wasn’t shy about expressing his views, or trying to educate others about the U.S. Constitution. David’s family plans to schedule a memorial service later in the year. Funeral services were private. The family suggests donations to the Father English Food Pantry at 435 Main St., Paterson, NJ 07501, or your local food pantry. Checks need to be made out to "Catholic Family & Community Services" please write "Food Pantry" in the memo area of the check. Enclose the check in an envelope with a note that the donation is in the memory of David Taylor.

The family of David Scott Taylor created this Life Tributes page to make it easy to share your memories.

Send flowers to the Taylor family.