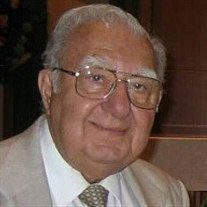 COLACCHIO, DOMINIC ANTHONY, 94, formerly of Mahwah, NJ, died peacefully at his home in Hanover, NH on Wednesday, August 23, 2017, surrounded by his family and the kind care of Wheelock Terrace and Bayada hospice. He was born to Antonio and Teresa (Spada) in Sandy Ridge, PA on September 3, 1922, the eldest of four children. He married the love of his life, Carmela "Millie" D'Esposito, on October 18, 1942; they were married for 70 years. They raised their four children in Bergen County, NJ where they lived for 86 years. In addition to his beloved Millie, he was predeceased by his parents, and his siblings Eugene Colacchio, Nancy Colacchio and Madeleine ("Dolly") Colacchio Strippoli. He is survived by his 4 children: Barbara Colacchio Comiskey of Bergen County NJ, Thomas and Marie of Norwich VT, Donald of Wareham MA and Michael of Marin County CA. Their beloved Pop-Pop will be missed by his 14 grandchildren, starting with the youngest: Ani Colacchio, Elizabeth Colacchio, Katharine Colacchio, Benjamin Colacchio, Magdalene Colacchio Melvin, Dominic Colacchio, Nicholas Colacchio, Bridget Colacchio Wesley, Rebecca Colacchio Thompson, Sean Comiskey, Regina Comiskey Regan, Therese Comiskey Najarian, Thomas Comiskey and Philip Romano as well as by his 14 great-grandchildren and several nieces and nephews. Dominic proudly served during World War II as a Sergeant in U.S. Army in the 75th Division, 289th Regiment Cannon Company, including during the Battle of the Bulge. As a young man, he enjoyed competitive bicycle racing and was an avid tennis player until he was in his 80's. A gifted artist, he worked for many years as a freelance artist in Manhattan. He was a noted photographic retoucher in the fashion and advertising industries ( before Photoshop ) working with many famous photographers, including Francesco Scavullo. Dominic was a faithful, longtime parishioner at the Ave Maria Chapel of the Catholic Traditional Movement in Westbury, Long Island, NY. He will be remembered for his unshakeable faith, fierce pride in his children and sensitivity to the feelings of others. He had the highest moral integrity and was the ultimate gentleman. Friends and family will be received on Sunday, August 27th from 7-9 PM and Monday from 2-4 and 7-9 PM at the Van Emburgh-Sneider-Pernice Funeral Home, 109 Darlington Avenue, Ramsey, NJ. A Funeral Mass of Christian Burial will be celebrated on Tuesday, August 29th at 10am at St Elizabeth’s RC Church, Wyckoff, NJ. Interment will follow at Maryrest Cemetery, Mahwah, NJ. Memorial contributions may be made to the Wheelock Terrace Employee Fund, ℅ Melissa Suckling 32 Buck Road, Hanover NH 03755.

COLACCHIO, DOMINIC ANTHONY, 94, formerly of Mahwah, NJ, died peacefully at his home in Hanover, NH on Wednesday, August 23, 2017, surrounded by his family and the kind care of Wheelock Terrace and Bayada hospice. He was born to Antonio and... View Obituary & Service Information

The family of Dominic Anthony Colacchio created this Life Tributes page to make it easy to share your memories.

Send flowers to the Colacchio family.