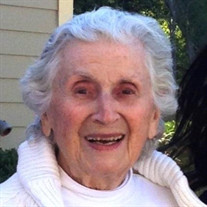 BAGLI, DOROTHY J., 94, of Franklin Lakes, NJ passed away peacefully on April 24, 2020. Beloved wife of Vincent J. Bagli for 61 years and the proud mother of 12 children, 20 grandchildren, and 3 great-grandchildren. Dorothy was a retired nurse and homemaker who lived in New Jersey, Florida, New York, Ohio, and Texas. She graduated from the St. Joseph’s Hospital Nursing School, Paterson, NJ, in 1948, and worked on staff at the Veterans Administration Hospital in Crugers, NY, near her childhood home in Peekskill. In October 1952, Dorothy married Dr. Vincent J. Bagli, then a Captain in the United States Air Force. She had 12 children over the next 15 years. Vincent, who died in 2014, was Chief of Plastic and Reconstructive Surgery at Hackensack Hospital, among his many other accomplishments. Dorothy supported Vincent’s medical practice by managing the book-keeping. A devoted and loving wife and mother, Dorothy was remarkably beautiful, kind, dignified, classy and warm. She could strike up a conversation with anyone. From the young to the aged, showed undivided interest and attention. Dorothy kept a neat and orderly home and absolutely delighted in caring for her children; no sacrifice was too great. She lived her life as wife and mother with deep peace and joy. She beamed when close friends and loved ones called her Dottie, for it signified a special closeness. The back door of the Bagli home was always open to her children’s many friends. Never was anyone ever turned away when the family dinner bell rang. It was a given that everyone present just squeezed in. Somehow, she always had plenty of food to go around. Dorothy never raised her voice or uttered a cross word. She was a woman of faith, who lived her life guided by Jesus, the Blessed Mother, and St. Joseph. Dorothy liked nothing more than having a big Sunday meal or a barbecue in the backyard with her large family. She loved to entertain and prepared many elegant banquets over the years. She and Vincent traveled in the US, Canada, Europe, and Asia. Following Vincent’s retirement, the couple moved to Ponte Vedra, Florida, where Dorothy became an avid bird watcher, enjoyed attending the symphony and opera, was a member of the garden club, played golf and tennis, and loved to read. She is survived by their children: Charles (Ellie) Bagli, Thomas (Uschi) Bagli, Sister Susan Bagli FMA, Jeanne Jenusaitis, Mary (James) Belsan, James (Francine) Bagli, Robert (Jacky) Bagli, Patricia (Brian) Baker, Nancy Bagli, Regina Calcagno and Christopher Bagli; son-in-law Anthony Markus; 20 grandchildren: Nikki (Rachel) Bagli Gottesman, Katy, Alina, Alexandra, Daniel, Meredith, Rachael, Julia, Elaina, Ethan, Michael, William, Andrew, Benjamin, Gracie, Zachary, Elizabeth, Nicholas, Laura Jean, James; and three great-grandchildren: Ruby, Isaac, and Leon. Dorothy is predeceased by daughter Carolyn Markus and sons-in-law Andrew Calcagno and Bill Jenusaitis. Interment at Christ the King Cemetery, Franklin Lakes, NJ. A memorial celebration will be announced at a later date. In lieu of flowers, donations in Dorothy’s memory may be made to the Salesian Sisters of St. John Bosco, Development Office, 659 Belmont Ave., North Haledon, NJ 07508.

The family of Dorothy J. Bagli created this Life Tributes page to make it easy to share your memories.

Send flowers to the Bagli family.