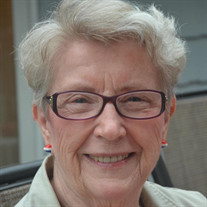 LINDERMAN, DOROTHY GAIL, (née Lutz) of Philadelphia, PA, died peacefully on June 4, 2020, after an extended illness. Dorothy was born in Kittanning, PA, and raised in Sardis, PA. She was valedictorian of her graduating class at Franklin Regional High school in 1951 and worked in administrative assistant roles in Pittsburgh until marrying the Rev. G. Richard Linderman in 1963. While devoting herself to raising her family and to community and parish involvement, she earned a Bachelor of Science in Sociology from Rutgers University and worked for 23 years as Director for Welfare and Senior Services in Mt. Olive Township, NJ. A life-long Lutheran and pastor’s spouse, Dorothy was active in the life of many parishes, as well as the global mission and social justice ministries of the New Jersey Synod of the Evangelical Lutheran Church in America. Her global mission interests took her to Tanzania, India, and Guatemala. She enjoyed her retirement in Philadelphia, PA, where she was active in two Lutheran parishes, in her condominium building activities, get-out-the-vote efforts, and various community education offerings. Dorothy will be remembered by many dear friends for her gregarious and affectionate nature and generous hospitality. Dorothy is preceded in death by her beloved husband, G. Richard Linderman, her mother, Sarah Lutz (née Wolf), her father, Arthur Lutz, and her brothers George and John. She is survived by her son Michael Linderman (and wife Johann Vento) of Ramsey, NJ, daughter Lisel Linderman (and husband Martin Linderman) of Sweden, and four grandchildren: Johanna and Elsa Linderman and Mira and Samuel Linderman-Vento. Due to Covid19 restrictions, funeral arrangements will be postponed until a later date. In lieu of flowers, please consider a memorial donation to one of the following: Feast Incarnate Ministry at the University Lutheran Church of the Incarnation, 3637 Chestnut Street, Philadelphia, PA, 19104, or St. Paul’s Evangelical Lutheran Church, 415 East Athens Avenue, Ardmore, PA, 19003.

LINDERMAN, DOROTHY GAIL, (née Lutz) of Philadelphia, PA, died peacefully on June 4, 2020, after an extended illness. Dorothy was born in Kittanning, PA, and raised in Sardis, PA. She was valedictorian of her graduating class at Franklin Regional... View Obituary & Service Information

The family of Dorothy Gail Linderman created this Life Tributes page to make it easy to share your memories.

Send flowers to the Linderman family.