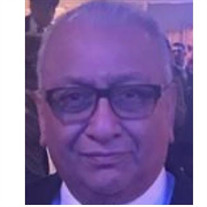 Dr. Guillermo S. Solis, known to friends as "Bill", has departed to be in the presence of his Lord and Savior on February 9, 2020. He had just turned 72 years old. Bill was born on February 2nd, 1948 to his parents, Guillermo Sr. and Olga Olga Solis, in the port city of Callao, Peru. He had a love for books and reading from a very young age due in part his father owning a book store while growing up. He would help his dad with the family business and often talked about his childhood and the wonderful memories he shared with both parents. Bill came to the United States for the very first time in the late 60's arriving in San Francisco, CA. He also traveled to Spain on a scholarship to attend a university there. He returned to Peru married his first wife. They both visited the United States in 1970 and stayed for two years in Queens, NY before returning back to Peru. In 1979, he returned to the states with his wife and children and settled in Paterson, NJ. He worked in Marcal Paper Mills in Elmwood Park, NJ on the overnight shift. He quickly got promoted to 3rd shift supervisor for the shipping department. He also owned and operated a Peruvian restaurant in the heart of Paterson during the day. Unfortunately, after 4 kids, Bill and his wife separated and eventually divorced in 1983. He remarried and relocated to Haverstraw, NY. It was during this period that he met his second wife and had 2 children together. Also in this same period, he started to learn about the commercial cleaning industry. He worked for numerous reputable cleaning companies in the mid 80's and became Operations Manager in charge of various important accounts. He employed many people of different ethnicities. He was always grateful for that experience. Bill again was separated and in the early 90's met his third wife and continued in the commercial cleaning industry as Operations Manager. He would also bring live salsa bands and singers popular at that time and promote at different venues. Bill and his third wife had 2 children before they separated and divorced. In 1999, Bill and his current wife Alba started their own commercial cleaning business from the ground up named Expert Building Services Inc. They both operated and managed a successful business and had numerous accounts ranging from preschools, gyms, corporate offices and comedy clubs. He retired after 20 years in 2019 from the cleaning company. He also returned to school in the early 2000's to continue his education and earned a doctorate degree in alternative/holistic medicine. He opened a natural/organic supplement and alternative medicine store in Clifton, NJ named Nutrasol. There he also met with patients and provided consultations for people who preferred treating their symptoms and illnesses with alternative/ holistic medicines and treatments. He remained doing this until he became ill. Bill lived a good life. Despite the many challenges he faced of being an immigrant in this great country, to having a strong accent when communicating in English; he accomplished so many things and was a successful businessman. He valued hard work and dedication and always gave a helping hand when he could. A devout born again Christian who loved reading the Word of God (bible) and teaching it to his family and loved ones as well. He will be dearly missed and always remembered! Bill was preceded in death by 2 brothers in Peru, his parents, and his granddaughter Samantha Solis. He is survived by his wife Alba Solis, 5 sisters, 1 brother, 8 children, 23 grandchildren, and 7 great-grandchildren. May his soul be in eternal peace. Friends and Family will be received on Thursday, February 13th from 4-8 PM at Manke Memorial at Scillieri-Arnold Funeral Home, 351 Fifth Avenue, Paterson. A Funeral Service will be held on Friday, February 14th at 10:00 AM at the Funeral Home. Interment will follow at Cedar Lawn Cemetery, Paterson.

Dr. Guillermo S. Solis, known to friends as "Bill", has departed to be in the presence of his Lord and Savior on February 9, 2020. He had just turned 72 years old. Bill was born on February 2nd, 1948 to his parents, Guillermo Sr. and Olga Olga... View Obituary & Service Information

The family of Guillermo S. Solis created this Life Tributes page to make it easy to share your memories.

Send flowers to the Solis family.