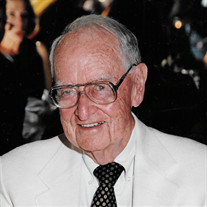 John (“Jack”) F. Coleman, age 99, of Mahwah, New Jersey, died August 9, 2018, at the Villa Marie Claire Residential Hospice in Saddle River. Born to Sarah (McLean) and John A. Coleman, he grew up in Brooklyn, NY, and, after graduating from night school, continued his evening education at New York University only to have that interrupted by World War II. He served in the 101st Horse Cavalry New York National Guard, and his army career brought him to combat in the Pacific theater – New Guinea, the Philippines, and at the initial landings in Japan at the surrender. He returned home to his wife in Teaneck, NJ, on Christmas Day 1945. While in the service, Jack married Eleanor Sigmund (deceased) and shared 67 wonderful years, having three daughters, Janice Rudd, Carol and Diane Coleman; five grandchildren, Jon Rudd, Casey Rudd, Megan Hoffman, Colin and Nora Verhoff; four great grandchildren, Eoin and Jamie Rudd, Quinn Struzinsky, and Ellie Dumsick. Among his employers, Jack spent 40 years in sales shared between the United States Rubber Company and Kaiser Aluminum & Chemical Company. From the latter, he retired in 1982 in sales management. He built a home in Ho-Ho-Kus in 1962 where he remained until moving to Brandywine Senior Living, Mahwah, NJ in October 2015. Jack was a member of Squadron C Club, Hobbyists Unlimited, VFW, American Legion, and active in various church and charity groups. A private memorial service and interment will be held.

The family of John Francis Coleman created this Life Tributes page to make it easy to share your memories.

Send flowers to the Coleman family.