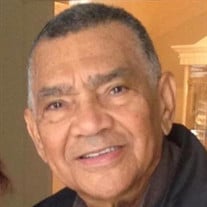 MEJIA, JOSE RAMON, 86, of Paterson died peacefully on Monday, April 20, 2020. Jose was born on November 22, 1933 in Riohacha, Colombia. Then he moved to the city of Barranquilla where he met the love of his life Leticia (nee Gonzalez). They were married and began an amazing loving marriage of 60 years. In 1966, Jose began a career as a Machinist for Avianca Airlines and came to the United States with his wife and their three sons, Felipe, Alvaro, and Jaime. They settled in Paterson, New Jersey where the family soon grew with a daughter, Ivette. Jose last worked as a Machinist for American Hose & Hydraulic, Paterson. Jose was a man of strong faith. He was a dedicated father, husband and friend to all. He gave love to everyone and asked for nothing in return. His core values of love, humility, integrity, generosity, honesty and affection will truly be missed by all who knew him. He never missed an opportunity to welcome and comfort everyone. He was sincerely genuine and a very gentle man with a huge heart and always with a big smile. His kind words, his advice and especially his hugs and kisses will truly be missed. Jose is survived by his beloved wife Leticia, three sons Felipe R. Mejia, Alvaro J. Mejia, Jaime J. Mejia and daughter Ivette S. Mejia and her fiancé, John V. Perry. Also survived by his cherished grandchildren Alexia Cole, Ayla Mejia, Brandon Lee Mejia and Justin Mejia. Jose was a devoted member of Blessed Sacrament RC Church, Paterson. Due to current health restrictions, cremation will be private. A Memorial Mass will be celebrated at a late date to be announced.

MEJIA, JOSE RAMON, 86, of Paterson died peacefully on Monday, April 20, 2020. Jose was born on November 22, 1933 in Riohacha, Colombia. Then he moved to the city of Barranquilla where he met the love of his life Leticia (nee Gonzalez). They... View Obituary & Service Information

The family of Jose Ramon Mejia created this Life Tributes page to make it easy to share your memories.

Send flowers to the Mejia family.