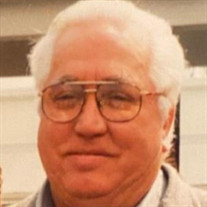 SENARIO, SR, LOUIS S., was born July 9, 1937 in Paterson, New Jersey to Edward and Vera Senario. He was a resident of Paterson, Haledon, and later Wayne New Jersey. He passed away on December 12, 2020, of natural causes. Louis received an Honorable discharge from the Navy in 1960 and married the late Winifred Senario (2020), they later welcomed two children Louis, Jr., and Karen. He worked as a chemical company supervisor in Bloomfield, New Jersey and a union representative. Later after retiring he worked in merchandising and delivery. He was a hard worker and dependable, he received company award certificates for perfect attendance. When both he and his wife decided they wanted to buy a home he worked two jobs; the second at his father's Bar establishment to make it happen. He enjoyed being with his grandchildren, for leisure you could find him at the Meadowlands Racetrack every Saturday enjoying Off-track betting during the day. He and his wife enjoyed trips to the Caribbean and going out to eat. He always enjoyed it when his son or daughter stopped by unexpectedly during the week to spend some time together. If there is one thing I could say about our father, he was the protector of his family in many aspects; he taught us to be strong-willed and determined to succeed in life. He is survived by his son Louis Senario, Jr., his daughter Karen Senario, his daughter in law Nancy Senario, his sister Amy Rulka, who resides in Florida, his grandchildren; Tara Shabrack, Alexis Shabrack, and their father Mark Shabrack, as well as extended family. Due to social restrictions, the family is forgoing a funeral service at this time. A memorial will be scheduled at a future date. In Lieu of flowers, a donation in Louis Senario’s name can be made to; The American Heart Association.

SENARIO, SR, LOUIS S., was born July 9, 1937 in Paterson, New Jersey to Edward and Vera Senario. He was a resident of Paterson, Haledon, and later Wayne New Jersey. He passed away on December 12, 2020, of natural causes. Louis received an Honorable... View Obituary & Service Information

The family of Louis S. Senario Sr. created this Life Tributes page to make it easy to share your memories.

Send flowers to the Senario family.