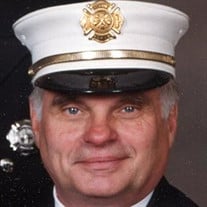 MANKE, LUDWIG, G., “LOU”, 76 of Upper Saddle River died peacefully on Thursday, November 13, 2014. Loving husband of 47 years to Joyce (nee Monsees). Adored father of Ronald W. and his wife Leigh, John P.L and his wife Trisha, and Peter R. Manke. Devoted brother of Lorraine and her husband Al Brinkman. Cherished grandfather of Michael J., John R. (Jack), Charles W. and Vivian R. Beloved uncle, cousin and friend to all. Before retiring in 1999 Lou worked for over 43 years for Western Union and AT&T. He was a US Army veteran and served from 1961-1963. Lou was an active member of the Upper Saddle River Volunteer (USR) Fire Department for over 40 years. During his tenure he served as Fire Chief, President and was currently the departments Treasure. Lou was an active member at The Lutheran Church of the Redeemer, Ramsey for over 40 years. He was also very active in the funeral industry taking care of families in their time of need. He worked for Van Emburgh-Sneider-Pernice Funeral Home, Scarr Funeral Home, Oakland Memorial Home and maintained the grounds at Redeemer Cemetery, Mahwah. Lou was also the proud father of three Eagle Scouts and served as a leader in BSA Troop 133, USR. Friends and family will be received on Saturday, November 15th from 6-8 pm and Sunday November 16th from 2-6 PM at The Lutheran Church of the Redeemer, 55 Wyckoff Avenue, Ramsey. A Funeral Service will be held on Monday, November, 17th at the church at 10:00AM. Interment will follow at Redeemer Cemetery, Mahwah. In lieu of flowers, the family is requesting donations to be made in Lou’s name to either The Lutheran Church of the Redeemer, 55 Wyckoff Avenue, Ramsey, 07446 OR the USRFD, 376 West Saddle River Road, USR, NJ 07458. Arrangements entrusted to Manke Memorial and Van Emburgh-Sneider-Pernice Funeral Home. Please send tributes, memories and condolences to www.mankememorial.com and www.vanemburghsneider.com

The family of Ludwig "Lou" G. Manke created this Life Tributes page to make it easy to share your memories.

Send flowers to the Manke family.