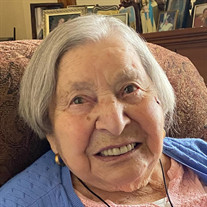 GAGLIANO, MARIA G. (nee TORRANO), 98, of Ann Arbor, MI formerly of Waldwick, NJ died peacefully on Friday, January 28, 2022. Beloved wife of the late Emilio Gagliano, loving mother of Lisa Murphy and her husband John, and the late Francesca Frankel and her husband Frank. Cherished grandmother of Julia, Allison, and Kyle Murphy. Maria was greeted in heaven by her siblings, Olivia DeMarco, Rosa Trifilio, Francesco Torrano, Elena Trifilio, Petrina Magurno, Dominic Torrano, their respective spouses, and her in-laws, including Elvira and Alfredo Gagliano. She is survived by many loving nieces, nephews, and friends. Maria was born on July 27, 1923, in Rosario, Argentina, and was raised in Diamante, Italy. She was married in 1948 and emigrated to Waldwick, NJ with Emilio and Francesca in 1954. She initially worked in Paterson as an assistant seamstress, and later at General Packaging in Waldwick. Maria lived happily among many family members and friends, she had a rich social life and she enjoyed cooking, canning, and gardening, especially flowers. Maria and Emilio traveled to Italy numerous times after Emilio retired in 1981. They retired to Hilton Head, SC in 2003 to be with Frances. Emilio passed away in December 2007, and she continued to live with Frances until her passing in October 2009. She then moved in with Lisa and her family and lived with them until 2019. Her grandchildren were the light of her life, and she was thankful to spend those years closely involved in their lives watching them grow up. She spent her last few years being well taken care of at Linden Square Assisted Living in Saline, MI, where she enjoyed playing bingo and dining with her friends. Maria was a devout catholic and a long-time parishioner of St. Luke’s Church in Ho-Ho-Kus. Maria will be remembered as always having a smile on her face and treating everyone with love and kindness. In lieu of flowers, the family requests that donations be made in Maria’s name to the Catholic Legal Immigration Network, Inc., 8757 Georgia Avenue, Suite 850, Silver Spring, MD 20910. Or online at: www.cliniclegal.org.

The family of Maria G Gagliano created this Life Tributes page to make it easy to share your memories.

Send flowers to the Gagliano family.