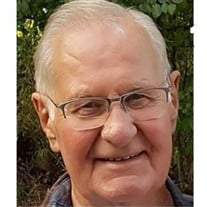 DEBOER, PETER, 86, of Midland Park formally of Wyckoff died peacefully on Tuesday, March 24, 2020. Beloved Father of Ruth Harrell, Reed De Boer and his wife Stacey. Cherished Grandfather of Dante Cianni, Angelica Cianni Villopoto and her husband Michael, Tony Harrell and Samuel Harrell. Cherished Great-Grandfather of Adriana and Vincent Villopoto. Beloved brother of Janet Miedema, and John De Boer and his wife Lois. He was predeceased by his brother Clarence De Boer and his wife Elsie, his brother Frank De Boer and his wife Lillian, and his brother Marvin De Boer. He is survived by Marvin’s wife Alida. He leaves behind many treasured nieces and nephews and their children. He is survived by the loving mother of his children, Grace Roukema De Boer. Close friends include Michael and Jill Pankow and Steven and Sherri Zeilnhofer and was affectionately known to them and many others as “Popsie”. Before retiring he was an owner/operator at Garden State Farms, had several small businesses including Torginol and California Stucco and was vice president of Reed Audio, Glen Rock. Peter proudly served in the US NAVY from 1954-1958 and in the National Reserves until 1960. He was a member of the Saltwater Fishing Club of Glen Rock with which he enjoyed many fishing trips. Peter spent his early years in New York State on his family’s farm. He had a great gift for growing things and always maintained a love for raising vegetables and flowers. He was able to fix or repair just about anything and always seemed to magically have the right part on hand. He found great pleasure helping Ruth and Reed with their home improvement projects or just milling around their yards and tending to their gardens. His absolute favorite holiday was Thanksgiving when the family would be together and he would tell each and every person how proud he was of them. He passed along many life lessons to us all including “If you’re on time, you’re late” and “You’ll never be sorry if you do the right thing”. He will be dearly missed. A memorial celebration of his life will be held at a later date.

The family of Peter DeBoer created this Life Tributes page to make it easy to share your memories.

Send flowers to the DeBoer family.