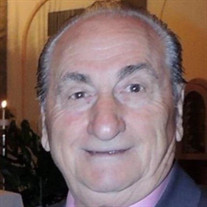 MESSANO SR., POMPEO, 80, of Hawthorne (formerly of Paterson) died peacefully on Tuesday, December 29, 2020 after a brief illness. Beloved husband of over 50 years to Anna Maria (née DeSimone). Loving father of Ester & her husband Paul; Pompeo, Jr.; and Ada & her husband Borce. Devoted brother of Maria, Carmine, Elio, Ada, Gino, and the late Alfonzo. Cherished Nonno of Julia, Giovanni, Sophia, Madison, Hannah, and Marcello. Growing up in the rural mountains of Italy, Pompeo developed a healthy work ethic early in life. After emigrating from Italy to the United States as a teenager, he came back to vacation in his native land in his mid-twenties. It was a chance encounter on the streets of Salerno that introduced him to the love of his life, Anna Maria in 1967. They courted for four months before he needed to return to the USA. Less than half a year later, he once again made the trip to Italy with the singular goal to make Anna Maria his wife. After convincing her father and her brothers that he would take good care of her, they wed on July 20, 1968. In true fairy tale style, she left her family and friends behind and joined Pompeo in America. They settled in Paterson and raised three children before relocating to Hawthorne in 1984. Before retiring, Pompeo worked at the National Biscuit Company (Nabisco) in Fair Lawn for over 39 years. With a true gift of gab and an omnipresent twinkle in his eye, he was a friend to one and all on the factory floor where he earned the nickname “Hollywood” for his love of dark sunglasses and shiny automobiles. After years of working double shifts (and sometimes triple) because he loved to keep busy, he took his pension and retired. Not one to sit still, he began day trading and delighted in joining the fast-paced world of the stock market. When the market was closed, he indulged his other passions including gardening, making homemade wine and sausage, hunting for mushrooms, walking, painting and re-painting his driveway, and sneaking food he wasn’t supposed to be eating. But most important to him was his grandchildren. He absolutely adored spending time with all of them – telling (and re-telling) his favorite stories, building snow pigs/cats in the back yard, and singing and dancing to make them giggle. He will forever be remembered for his booming voice and his ever-present smile. Friends and family will be received on Friday, January 1 from 2-4 and 6-8 PM at Manke Memorial @ Scillieri-Arnold Funeral Home, 351 Fifth Avenue, Paterson. A Funeral Mass of Christian Burial will be celebrated on Saturday, January 2nd at 9:30 am at St. Anthony’s RC Church, 276 Diamond Bridge Ave, Hawthorne. Entombment will follow at Calvary Cemetery, Paterson. In lieu of flowers, the family requests donations be made in Pompeo’s name to the Hawthorne Volunteer Ambulance Corps (https://www.hawthorneems.org/).

The family of Pompeo Messano Sr. created this Life Tributes page to make it easy to share your memories.

Send flowers to the Messano family.