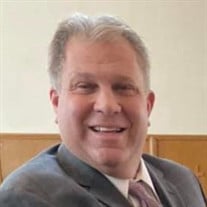 FISCHER, ROBERT "BOB" A., of Upper Saddle River, formerly of Ridgefield, NJ passed away suddenly on July 8, 2021, at the age of 60. Bob was born on March 8, 1961, in Englewood, NJ to Ellen Marie Fischer (Lindstrom) and the late Robert Allen Fischer Senior. His memory will be kept alive and cherished by his loving family. Bob is survived by his high school sweetheart, wife of thirty-five years, Cheryl Lynn Fischer (Nicolich); his daughter Arielle Lombardozzi (Dominick) of Wallingford, CT; his sons Bobby and Zachary Fischer of Upper Saddle River, NJ; his mother Ellen Fischer; his sister Debra Fischer (Rich); Bronwyn Fischer, wife of his predeceased brother Gary; his grandchildren Nico and Sophia Lombardozzi (granddog Rudy); as well as several sisters-in-law, brothers-in-law, thirteen nieces and nephews, his dog Jake, and an abundance of extended family and friends. Bob was owner and operator of Bob Fischer Provisions, a Thumann’s distributor, for over forty years. He was a dedicated businessman who serviced his customers with personality and professionalism. To his detriment, as he would say, he was a lifetime Mets and Jets fan to the end. He greatly enjoyed spending time at his beach home in Point Pleasant Beach, NJ where he was a member of the boat club and an avid fisherman. His hobbies included: biking, cooking gourmet meals, reading, swimming, skiing, tennis, and following professional sports, but most of all spending time with his family and friends. His greatest joy was his role as Grandpapa to his two grandchildren. Bob was a kind-hearted soul who always had a smile on his face and brought joy to all around him. He is truly unforgettable. A Memorial Mass will be celebrated on Friday, July 16th at 11:15 AM at the Church of the Presentation, 271 W Saddle River Rd, USR. Cremation was private. In honor of Bob, donations can be made to the Upper Saddle River Fire Department, where his son Bobby is a volunteer fireman, at 375 West Saddle River Road, Upper Saddle River, NJ 07458.

FISCHER, ROBERT "BOB" A., of Upper Saddle River, formerly of Ridgefield, NJ passed away suddenly on July 8, 2021, at the age of 60. Bob was born on March 8, 1961, in Englewood, NJ to Ellen Marie Fischer (Lindstrom) and the late Robert Allen... View Obituary & Service Information

The family of Robert "Bob" A. Fischer created this Life Tributes page to make it easy to share your memories.

FISCHER, ROBERT &quot;BOB&quot; A., of Upper Saddle River, formerly of...

Send flowers to the Fischer family.