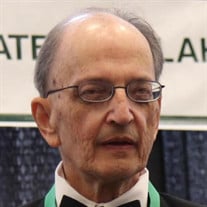 FOX, RONALD A. “RON” of Hawthorne, retired award-winning sportswriter of The Record, died peacefully on Saturday, October 30, 2021, at the age of 79. He was the New Jersey Sportswriter of the Year and an inductee into the National Wrestling Hall of Fame as a writer. He is survived by his wife of 46 years, Denise; their son, Graham of Hawthorne, and Graham's fiancé Carrie of Bayonne. Ron graduated from Clifton High School in 1960 and attended Rochester Institute of Technology before being hired by the Herald News as a municipal reporter. He was drafted and served as an Army Medical Corpsman, Specialist 4th Class, from 1964-66, with the 418th Medical Co. at Fort Chaffee (Arkansas) and Fort Bliss (Texas) and the 106th General Hospital in Yokohama, Japan, working in an Army hospital where evacuated wounded military from the Vietnam War were treated. Once discharged, Ron became a municipal reporter for the Herald-News before being hired as a sportswriter by the Morning Call of Paterson, which was owned by The Record at the time. When The Call went out of business, Ron worked in public relations for the Jersey Jays, then the farm club for the National Football League's Cleveland Browns operating out of Jersey City's Roosevelt Stadium in the early 1970s. He also worked part-time for Salem Press in Englewood. Ron then served as a sportswriter for the Ridgewood Newspapers for nearly 10 years, for which he wrote his popular column, The Fox's Lair. After that, he covered high school and college sports for The Record for 26 years until his retirement in 2004. On occasions, he wrote under the name Earl St. Claire, taken from a combination of family names. In addition, Ron doubled as a music reviewer for The Record from 1995-99, specializing in jazz, and wrote a fantasy baseball preview for the paper for several years. Named Sportswriter of the Year by the New Jersey Sports Writers Association in 1977, he also was honored by the Bergen County Coaches Association twice, for baseball and wrestling writing, and earned numerous awards for football coverage from the New Jersey Press Association. For several years, The Record presented The Ron Fox Award to the best high school male athlete of the winter season. When he began covering high school wrestling, Ron knew nothing about the sport, but learned its intricacies so well that by 1986, he had authored "Wrestling Basics," (Prentice Hall), an introductory book to pique the interest of youngsters. Wrestling fans appreciated that Ron didn't just write that a takedown or a pin had decided a match. He used the terminology that explained exactly the move or hold that made the difference. He was inducted into the National Wrestling Hall of Fame as a writer in 2012 honoring his coverage of amateur wrestling on the high school, college and international levels, and was named previously to the Region 2 and Region 4 Wrestling Halls of Fame in North Jersey. He served as a member of the committee that selected the All-State football team for the Associated Press and served on the nominating committee of the New Jersey Sports Hall of Fame for 10 years and on the NJSIAA Executive Committee for Wrestling for 15 years. After retirement, Ron continued to write for weeklies owned by The Record -- Ridgewood News, Town Journal, Town News and Suburban News. Intermittently, he also wrote feature stories for The Record. He was writing for the various papers until shortly before his passing. In 2010, when Record colleague John Brennan wrote a history of the paper's sports department, he authored a separate article about Ron, stating "Of all The Record's local sports reporters of the last half-century, none may be better known or more beloved to readers and colleagues than Ron Fox." Ron was a member of Grace Bible Church in North Haledon. Friends and family will be received on Tuesday, November 2nd from 4:00-8:00 PM at Manke Memorial @ Scillieri-Arnold Funeral Home, 351 Fifth Avenue, Paterson. A Funeral Service will be held during visitation at 7:30 PM. A Graveside Service and Burial will be held on Wednesday, November 3rd at 11:00 AM at Restland Memorial Park, 77 DeForest Avenue, East Hanover. ALL MEET AT THE CEMETERY. In lieu of flowers please consider making a donation in Ron’s name to the Grace Bible Church, North Haledon. https://onrealm.org/GraceBibleChurc33842/-/form/give/now

FOX, RONALD A. &#8220;RON&#8221; of Hawthorne, retired award-winning sportswriter of The Record, died peacefully on Saturday, October 30, 2021, at the age of 79. He was the New Jersey Sportswriter of the Year and an inductee into the National... View Obituary & Service Information

The family of Ronald A. "Ron" Fox created this Life Tributes page to make it easy to share your memories.

Send flowers to the Fox family.